Let’s look into the Ah Louis family papers and the description that has been completed for some of the materials within this collection.

Description of the Collection

Per the description of the collection:

“The Louis Family Papers contains nineteenth- and early twentieth-century business records and personal papers of the Louis family, a prominent and pioneering mercantile family in San Luis Obispo, California. Born in China, Wong On (Ah Louis) migrated to the United States in 1861 and opened a Chinese mercantile store in San Luis Obispo in 1874. Included are the records of Louis' children, of which Howard Louis' records comprise the bulk. The collection is comprised of approximately 20 linear feet of family correspondence, financial and legal records, and business correspondence and financial records."

Some of the images included in this collection portray people that have still not been solidly identified by SC&A staff. The names of the people in the Louis family have been clarified and are present throughout this collection, when known. However, there are a handful of names found on different materials within the collection that have been not connected to a person also within the materials. Therefore, we must exercise discretion when describing specific images to maintain respect for the materials entrusted in our care.

*Yes, with some communication between the living members of the Louis family we could potentially hammer out who is who. But, the current state of this collection has not clearly identified who is who within many images, so we must still work from a place of discretion. 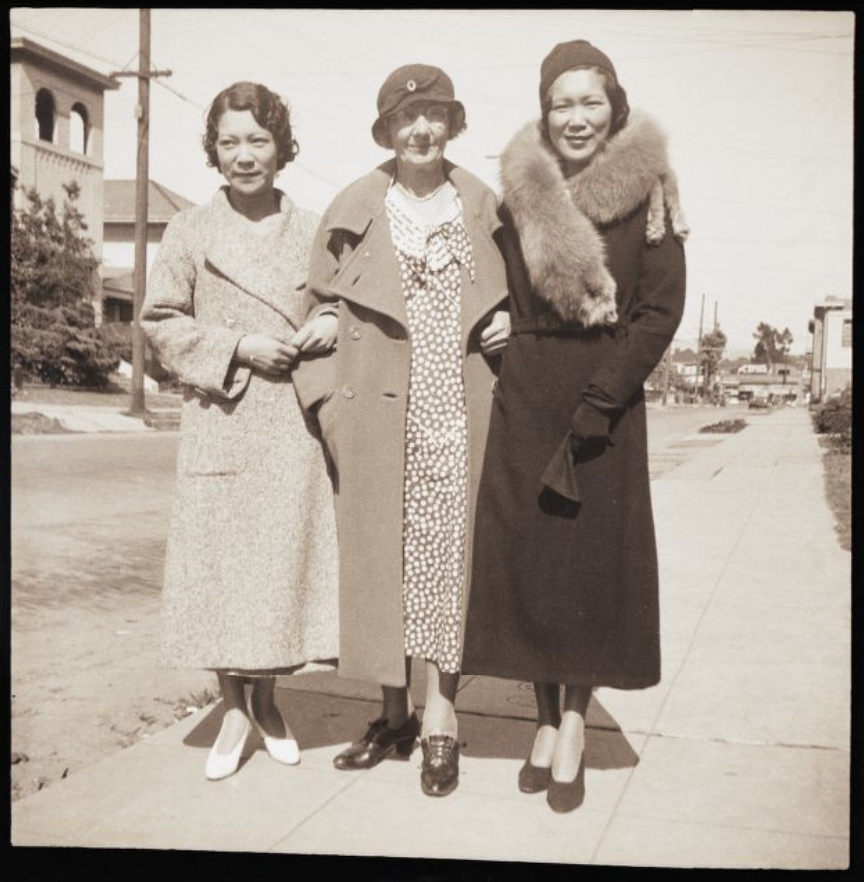 Here is an image from the collection. In this photo, there are three people, presumably female-identifying based on their attire and presentation, standing on the street in San Luis Obispo. The photo is dated back to circa 1933-1934. The description of the image reads, “The two younger women [left and right] may be Louis sisters, Mae, Helen, or Lena. A sign with the word 'Playing' is in the far background.”

While it makes logical sense to presume that the two people on the left and the right are relatives of Ah Louis, we must be cognizant of where and how we are making presumptions. Because this photo exists within the Ah Louis collection and based on the appearance of the people in the photo, it has been decided by SC&A archivists that the two outer people in the photo are Chinese and related to Ah Louis in some way. Because of their inclusion in the collection and existence of these names in other materials within the collection, the names “Mae, Helen, or Lena” have been listed to potentially identify these people. It is important to unpack why this can be potentially harmful. We run the risk of racial stereotyping when identifying them as such, because of the history of racism and oppression toward Asian people in the United States. There was once a thriving Asian community within SLO, but because of the anti-Asian action taken to oust successful immigrants travelling from Asian countries in the 19th century, Chinese immigration specifically was gravely impacted. At this point, the Chinese Exclusion Act was in place and therefore the Chinese community in SLO and the broader continental U.S. was stifled. The Louis family, because they were in SLO before the exclusion act, remained in SLO for the duration of the 20th century. Still, it has not been certified by SC&A staff that they are actually any of the three Louis sisters. If we have identified these names and presumed these people to be two of the Louis sisters, we might have also just identified two different Chinese people as members of the Louis family and, given our existence as a white institution and the work of white archivists to do this description, and committed an act of racial stereotyping. The identification of BIPOC people must be approached with sensitivity, because of the inherent otherness of a diverse ethnic identity that stems from White supremacy. Because White is the baseline for most culture and norms within the United States, to physically appear different from the norm sparks conversations of difference. Given the context of the Chinese Exclusion Act and the treatment of Asians and Asian Americans during the era the photo was taken, we must be careful in our assumptions and conclusions. However, the general context of these images points to enough evidence that, because this photo exists within the Ah Louis Papers and is identified at the period in which the Louis siblings were alive, there is enough reason to believe these people are potentially part of the Louis family.

More than the identification of the two people in the photo, it is important to ask: why is the person in the middle not identified? Why have we chosen to focus on the two visibly POC in the image? There is not a presumed “correct” answer to how materials like this image should be identified. This section is included to give you the chance to understand how much thought goes into the selection of words for descriptions. When crafting descriptions for SC&A, it is vital that we are always cognisant of how race, ethnicity, gender, and age impact word choice, so that we create the most equitable, concise, and relevant description we can.